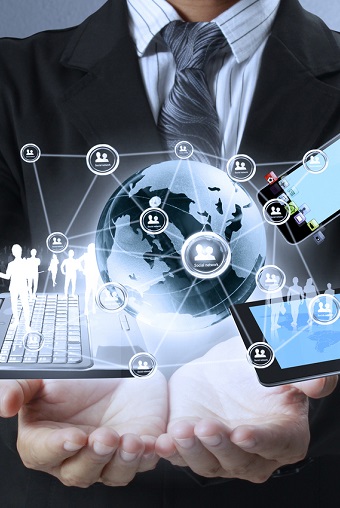 Introduction to the Telecommunications Industry


(Since some people have more than one subscription, the number of individual subscribers is significantly lower.)  Most new smartphones feature a dizzying array of advanced features.
In addition, smartphones and tablets are internet-capable, typically able to take full advantage of high-speed access on 4G networks (and, to a growing extent, newer 5G networks).
This means that small, lightweight smartphones and tablets can do most of the work of a standard desktop PC.
Consumers love the flexibility and capability of smartphones, and by some estimates spend an average of three hours per day using them in the U.S.
When considering this development, it is important not to overlook the way that smartphones have disrupted traditional business sectors.
For example, thanks to the powerful cameras built into smartphones, the number of photos taken by consumers has soared at an astonishing rate, while sales of traditional cameras have plummeted.
Plunkett Research estimated that there were 464.3 million total wireless connections in the U.S.
by 2020.
Total U.S.
wireless service company revenues were about $197.5 billion during 2020, according to Plunkett Research estimates.
By 2020, 85% of U.S.
cellphone users were on smartphones, according to Plunkett Research estimates, compared to only 61% in early 2013.
Consolidation of wireless service providers has been a strong trend worldwide over recent years.
Sprint and competitor T-Mobile completed a merger on April 1, 2020.
The combined businesses intended to invest approximately $40 billion


Thanks to the Coronavirus pandemic, even groceries have moved into the fast lane, as online grocery and household product sales are growing quickly while consumers enjoy same-day delivery options.
The most powerful trends on the internet include access via smartphones, the migration of entertainment, including TV programming, to streaming services, as well as technologies based on software-as-a-service in the cloud. The standout winner in ecommerce continues to be Amazon, where sales have soared thanks to aggressive pricing, free shipping for its “Prime” members and an ever-growing variety of merchandise.
Most recently, the Coronavirus gave Amazon an exceptional shop-from-home boost.
The firm’s sales outside of North America are booming as well, despite the fact that it has major foreign competition, particularly from companies based in Asia.
Analysts at eMarketer reported American ecommerce sales in 2021 of an estimated $933.3 billion (up significantly from $883.8 billion in 2020).
This figure includes online retail product sales, travel sales and digital downloads, but not online gambling.
Global internet ecommerce sales exceeded $5.54 trillion in 2021, according to eMarketer.
China is posting phenomenal growth in ecommerce, up by 44.8% in 2020, according to analysts at eMarketer, to a total of $2.297 billion. Digital advertising in the U.S., during 2021, was a projected $191.09 billion, according to eMarketer, up 25.5% from 2020.
Mobile