viewfree sex videos
Home > News > New! Everything you need to know about the Internet of Things (IoT)

New! Everything you need to know about the Internet of Things (IoT)

To put the massive scale and potential of IoT technology in perspective, consider the following: In a world of roughly 5 billion people with access to the internet (about two-thirds of the world’s population), about three times as many (14.6 billion) objects will be connected to the internet by 2022, according to projections by network device firm Cisco. Over the very long term, trillions of objects, points of geography, buildings, devices, appliances, vehicles, etc. may eventually be communicating with each other, over the IoT.

How IoT Works: Simply put, IoT is a method of enabling objects to communicate with each other. Most aspects of this process can also be described as machine-to-machine (M2M) communications. A network of some sort is always involved, thus the use of the descriptor “internet of things.”

The IoT “Network of Networks”

Eventually, IoT will become a massive, all-encompassing “network of networks.” That is, IoT networks that will be based within individual home Wi-Fis and business locations, while organizations and systems in education, health care, transportation, the environment, the supply chain, the industrial base, government, etc. will interconnect and communicate with each other in myriad ways via IoT.

The global technology sector has long recognized what is called the “network effect.” This phrase evolved to define the fact that the value of a network increases exponentially as the number of users (people, devices, sensors) on the network grows. That’s the track that IoT is on today—a limited number of devices in the network that will, over time, grow to hundreds of billions of devices, thereby creating extraordinary value and efficiency.

Imagine a modern passenger cruise ship, a behemoth that may transport 6,000 passengers and 2,500 crew members over long distances. The vast number of complex on-board machines and systems are both mission-critical and subject to potential failures. Consequently, the use of digital, M2M communications via an on-board network is a logical way to keep the ship operating smoothly while ensuring passenger safety and comfort. Sensors can gather multiple points of data on the massive engines that power the ship—temperature, oil condition, fuel use and vibration. Such sensors might detect vibrations that indicate a potential bearing failure that could lead to an engine shut down. Preventative maintenance could be planned.

Other sensors might determine that the air conditioning system is having difficulty maintaining the correct temperature on A Deck. Yet another sensing system might detect a leak in a fuel bunker. Continuous gathering and analyzing of such data can not only boost safety but also lead to savings of massive amounts of time, fuel and expense. Crew members on board can take appropriate preventive actions in many cases. Other situations may require dockside repairs. At the same time, imagine this ship communicating its location, speed and direction 24/7 to other ships nearby for safer passage. This occurs today via AIS (Automatic Identification Systems).

Now, imagine the same types of sensors applied to a manufacturing plant, a refinery, an airport, a commercial airliner, a hotel or a shopping mall. IoT will be utilized in all types of facilities and systems.

Today, massive investments in research, development and applications of IoT, AI and machine learning are being made by government and industry on a global scale. For example, in 2018 Samsung announced it would invest more than $22 billion over the following three years in development of advanced technologies, including AI. It planned to create a staff of at least 1,000 researchers and engineers dedicated to AI by 2020. 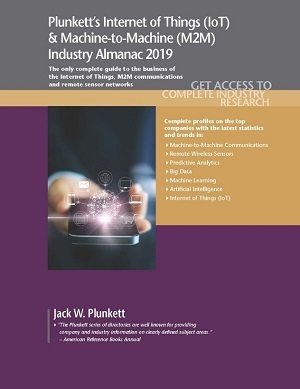