If health care and education hadn’t become so expensive in recent years, we might be putting a lot more money into savings and investment.  Health care now accounts for almost 8% of a typical household’s spending, a ratio that nearly doubled from 2005 through 2016!

Education accounts for 2.3%, so much so that student loan totals (with $1.2 trillion outstanding balances) are 70% higher than total credit card balances.

Meanwhile, unhealthy habits take a big bite out of our wallets, with tobacco/smoking accounting for 0.6% of spending and alcoholic beverages nearly 1%.  Put another way, we spend five times as much on alcohol as we do on reading materials like books.

We spend a roughly equal amount on food purchased to eat at home and food/beverages in restaurants.

While we still spend most of our money by walking into stores at America’s 116,000 shopping centers, it’s not a big surprise that we spend an ever-increasing portion of our money by shopping online. It isn’t at all hard to imagine Amazon becoming America’s largest retailer someday.  (A distinction currently held by Wal-Mart.)  Meanwhile, 15.8 Americans work in retail, making it one of our largest employment sectors by far. 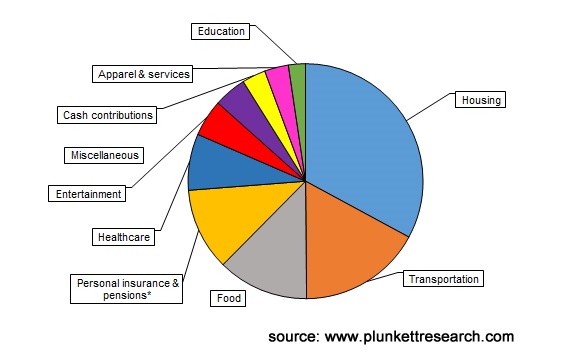 All the information you need about the global wireless industry can be found at Plunkett Research, including our Retail Industry Research Center Online, and our just-published, completely-updated Plunkett’s Retail Industry Almanac, 2017 edition. 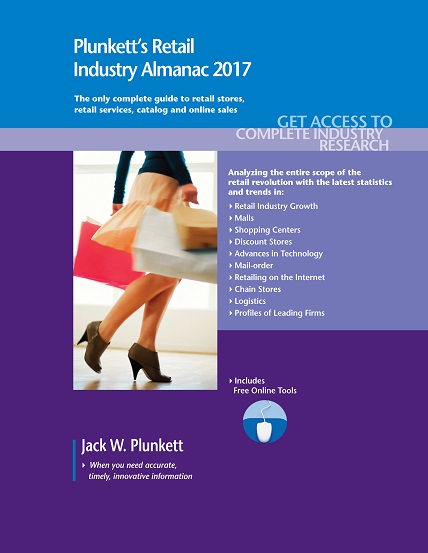