The sharing economy is disrupting the nature of work, employment and entrepreneurship. Most sharing/gig economy workers are working as independent, contract workers, not employees. This means that they do not qualify for company-provided benefits such as health coverage or retirement plans. Many of them conduct work for two or more sharing economy firms. That is, a worker might drive for Uber at night, do installations for TaskRabbit on weekends and shop for Instacart on weekdays. They may quickly vary their schedule according to the demand level, which can be constantly monitored via smartphone.

In one-on-one interviews, Plunkett Research has found that many sharing/gig workers consider themselves to be “entrepreneurs.” While they may not have created a new company that employs others or makes unique products, they nonetheless work for themselves, independently, using their own tools or vehicles and setting their own schedules. In that regard, they are literally running a business, in the same way that a one-person plumbing shop is a business. Traditional new business formation has been weak in the U.S., which is a startling change. In particular, formation of businesses that intend to hire employees and pay wages (as opposed to one-person enterprises) has been extremely weak.

At Plunkett Research, we believe that the weakness in small business startups is fueled by the ease of finding independent work in the sharing/gig economy, with little or no capital or risk involved and the prospect of immediate income. In addition, working independently in this manner generally requires no specialized education, and no licensing beyond a drivers’ license. This type of work also lends itself very well to people, such as retirees or students, who only want to work part-time, or who want a part-time sideline in addition to a regular job. One study found that 49% of part-time independent workers also had a full-time traditional job.

People who intentionally choose the independent work life tend to state extremely high levels of satisfaction with their work life as compared to traditional workers. The recite perceived value from being their own boss or having great flexibility in they way they schedule and manage each day.

There is a significant debate underway in many nations as to whether or not people working as Uber drivers, Instacart shoppers and similar agents are actually employees, rather than contract workers. Legislative reform may well be attempted on large scale in this regard. In some cases, class action lawsuits have been filed by the contract workers. If courts eventually rule that such workers are actually employees, it would have a massive effect on the business models of sharing economy firms. In the U.S., for example, it would mean that firms were subject to paying payroll taxes such as Social Security, and were subject to very high levels of labor, safety, health and anti-discrimination laws. This debate will likely continue for many years to come, and may well lead to legal reform in some nations. Another outcome may be the formation of contractor workers’ unions or union-like organizations that might demand better pay or working conditions. The “Independent Drivers Guild” now exists in New York City, representing tens of thousands of local Uber drivers, but not quite acting as a true labor union.

Meanwhile, intense competition among gig delivery firms, such as Uber, Didi and Lyft, to attract new drivers is causing the companies to offer sign-on bonuses and other perks. Over the long term, however, some types of gig jobs are definitely threatened by advances in technologies—this includes self-driving cars that may replace human drivers, and food-delivery robots (such as those now being tested on some university campuses.)

Everything you need to know about the Sharing and Gig Industry: 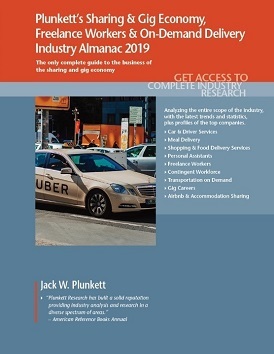